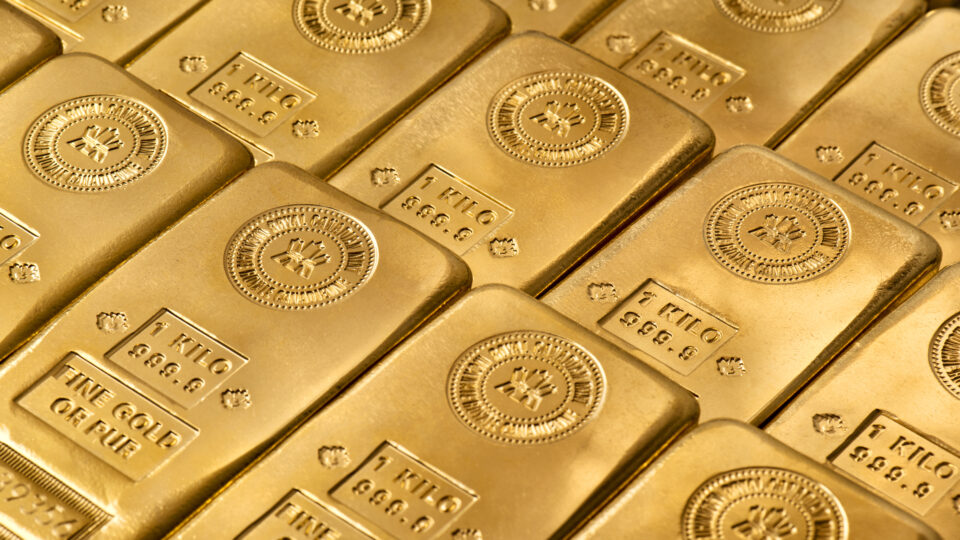 There has never been a better time to add gold to your portfolio, but if you’re waiting for mainstream financial media like the Wall Street Journal to let you in on this secret, you’ll miss this golden opportunity.

In fact, Wall Street banks and the financial media are ignoring the largest-ever surge of speculative short selling—or betting against the price of the precious metal—in recorded history. On the leading commodities exchange, there is $21 billion worth of gold being shorted by speculators such as hedge funds ($21,072,650,508 to be exact, according to the latest data). That’s more than five times greater than normal and is almost 20% of the entire world’s annual production of the precious metal.

For the reasons summarized below, previous upsurges in short-selling have always been buying opportunities. Is today such an opportunity? Judging by the scale of what’s happening now, the gold market may be having “the sale of the century”. 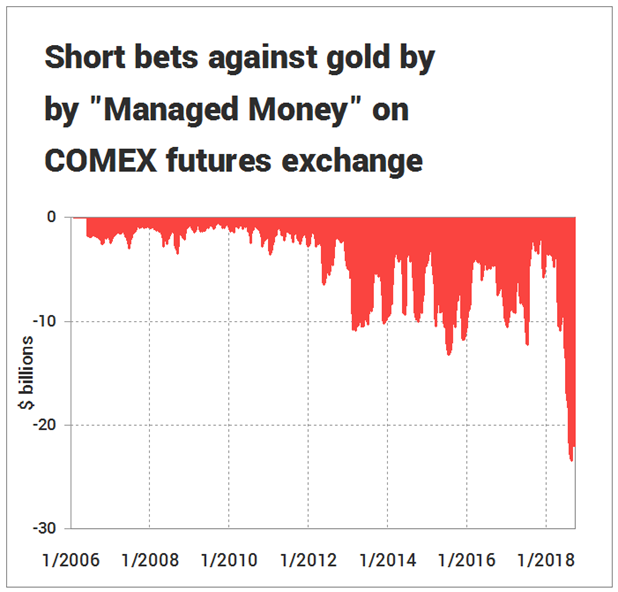 The Commodity Futures Trading Commission (CFTC) weekly government report that breaks down what different types of traders are doing in financial markets currently shows that a record number of hedge funds and other Wall Street speculators are betting against the price of gold. To do this, they have locked in orders on exchanges to sell gold in a few months, mainly between October and December. This means that the price of gold is likely to rise significantly in the coming months, based on previous similar occurrences.

Why? When speculators lock in orders to sell gold in the future (“short” gold futures), they are expecting the price of gold to decrease. They hope to buy the metal again at a lower price later to cover their obligations to sell. When the price stops going down, these speculators will rush to cancel their short bets. This means they have to buy gold again, which will put pressure on the price to climb again.

Therefore, when surges of speculative short-selling end, they are consistently followed by periods where the price of gold rises more, and longer, than usual. The historical data for how this pattern repeats is compelling. The last four times gold experienced similar upsurges in short-selling, the price of gold saw an average return of 13% in six months and more than a 16% average return in 12 months.

Speculative short-selling waves have historically proven to be a strong indicator for looming buying pressure on gold, causing its price to rise and stay strong for a long time. Today’s aggregate level of shorting by speculators is at a record level. To cancel the total amount of short bets on the leading futures exchange, speculators would need to buy $22 billion worth of gold.

The net short quantity of speculator bets today is (almost) $10 billion. This number reflects the total amount of long bets minus the total amount of short bets. The latest weekly report reported $12 billion long minus $21 billion short, equaling $9 billion net short. This is the largest quantity of net short selling since the government began publishing this data in 2006, which is reflected in the below chart. 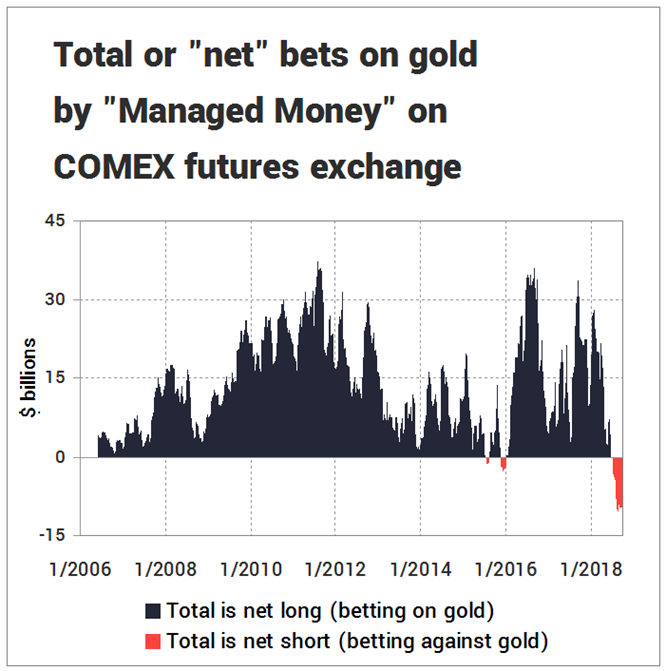 Also, as the following chart demonstrates, the past four extended surges in short-selling by speculators have coincided with troughs in the price of gold and were followed by the gold price rallying. 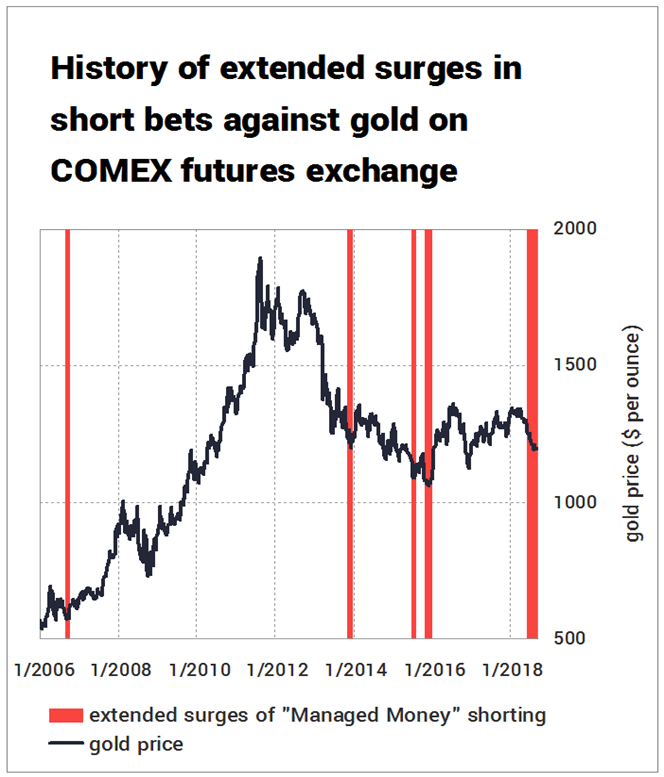 Sources: LBMA, CFTC; an extended surge of “Managed Money” shorting is defined as a period when the net amount of gold futures held by “Managed Money” traders drops under $2 billion long or zero (i.e.: becomes net short) and remains below the respective level for more than 30 days

Here are the major trends currently highlighted by financial media: the longest equities bull market in U.S. history, record-low unemployment, and a strong dollar. These stories permeate the mainstream and lead to consensus thinking that causes investors to question the need for gold—and drives speculators to bet against it.

Gold, like most commodities, is priced in dollars. Many currency traders bet on a rising dollar by “shorting” gold—but this practice is not sustainable. Gold is a limited resource, whereas currencies can be subject to significant fluctuations in quantity and value. Eventually speculators will have to actually go out and buy gold to cancel out their short bets and, when they do, the price will go up.

It’s worth noting that two key groups have been betting on the price of the precious metal to go up. The companies that mine or refine gold, as well as the global banks that trade it, are buying up gold futures at a record pace. They are the true “insiders” who understand real supply and demand—the fundamentals that drive the gold price’s direction.

Normally, the gold mining, refining, and trading pros bet against the precious metal by shorting futures. They do this to “hedge” or cancel out their exposure to changing values of their gold inventories. In the past three months they’ve gone from shorting their long-term average amount of $20 billion worth of gold to being net long $1 billion, an all-time record. In other words, pros who are “in the know” have effectively bet more than $20 billion on an imminent surge in the price of gold.

The professional insiders are taking a record contrarian stance against the Wall Street speculators, and perhaps so should you. If you’re thinking of adding more gold to your portfolio, make sure you go against the trend and buy now, before the price begins to surge.

These are the times when investors who go against the trend acquire more gold, and they are the ones who see an above-average return on their investment.

Data sources: CFTC and LBMA (updated 9/14/2018); an extended surge of “Managed Money” shorting is defined as a period when the net amount of gold futures held by “Managed Money” traders drops under $2 billion long or zero (i.e.: becomes net short) and remains below the respective level for more than 30 days